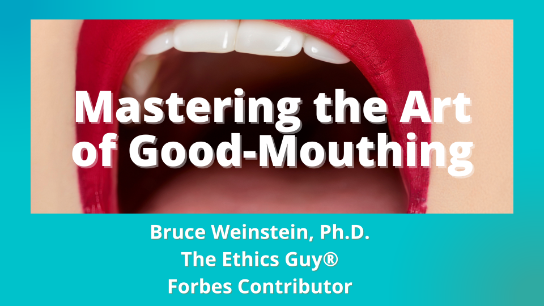 Mastering the Art of Good-Mouthing

Good-mouthing is the practice of saying something good behind someone's back. If it seems like a strange term, it is. Googling "badmouth" yields over 4 million results. "Goodmouth" produces a mere 1 million, most of which are about dentistry.

It's great to have a healthy mouth, but it's also good to speak well of people when they're not around. It's even better to do it when they're in front of you. Why don't we do this more often?

Badmouthing in the news

Just like Roy Kent in Apple TV’s Ted Lasso, badmouthing is here, it's there, it's every(*)where!

Pick a story in the news at random. Here’s Prince Harry in an excerpt from today’s New York Times review of the new Netflix documentary about him and Meghan Markle, the Duchess of Sussex:“[T]he majority of my memories are of being swarmed by paparazzi. Rarely did we have a holiday without someone with a camera jumping out of a bush, or something.”

Director Liz Garbus is one of the most incisive documentarians today, and no doubt she presents a rich portrait of Prince Harry in her film. (I’ve yet to see it.) The review, however, focuses on his horrible experiences growing up as a member of Britain’s royal family. Harry is quoted as saying some lovely things about his wife and mother, but the majority of the article is about the negative aspects of his life.

To be fair (and avoid badmouthing the Times reviewer), the piece concludes with, “This article is being updated,” so perhaps a more balanced view will emerge.

One of the most misbegotten expressions today is “It’s all good.” Nobel laureate Bob Dylan was right on the mark in criticizing it in the closing song of his album Together Through Life. Antisemitism, racism, ageism, and other forms of unjust discrimination deserve to be called out for what they are.

A plea for good-mouthing is not a call to gloss over injustice. In Candide, Voltaire was right to poke fun at the fictional Dr. Pangloss for constantly saying, “This is the best of all possible worlds.” It’s not. It could be a lot better. Hence this article’s prescription of more good-mouthing.

The consultant who refuses to speak ill of people

I was having lunch in Denver with consultant Steve Werner some years ago. The service was slow. I complained about it to Steve. "Maybe our server is having a bad day," he replied.

He gave her the benefit of the doubt. It's just not in Steve's nature to speak ill of people, especially when they're not around to defend themselves. He likes to speak well of others. Jeanne M. Stafford, past president of the New York City chapter of the National Speakers Association, is also a master at good-mouthing people. That’s why both Werner and Stafford are two of the good ones.

Later today, when you're talking about person X to person Y, take a moment to notice whether you're bad- or good-mouthing them. If it's the former, why not add the latter into the mix? Chances are it's possible to find something of value to say.

Also, at your next team meeting, invite each person to good-mouth someone on the team. Ron Karr, author of The Velocity Mindset: How Leaders Eliminate Resistance, Gain Buy-in, and Achieve Better Results—Faster, suggested this exercise to a group that he and I belong to. We did it, and three years later I continue to think about the nice things I heard that morning. A few of those bon mots still positively affect the choices I make.

With all of the negativity in the world, wouldn't it behoove us to say a few good things about people behind their backs from time to time? Bonus points for telling that person the kind things you said or heard the next time you see them.

Thank you for reading my blog. I hope you're having a good day.

Use the coupon code ETHICSROCKS to get 30% OFF on all of my ethics courses, such as:

“How Practising Gratitude Enriches Your CPA Practice--and You”

If you want to enrich your business through the practice of gratitude, why not enroll now?

The code will work on all of my other ethics courses, which you may see here (scroll down past my bio).

We'll keep you in the loop with everything good going on in the modern professional development world.

By submitting this newsletter request, I consent to LearnFormula sending me marketing communication via email. I may opt out at any time. View LearnFormula's privacy policy